A Poisonous but Medicinal Native Plant

American Pokeweed (Phytolacca americana) is a perennial herb that is native to much of North America and grows in the woods at Distant Hill. It is a beautiful and very vigorous plant that can grow to a height of more than ten feet.

Some research has shown that a protein contained in pokeweed, called pokeweed antiviral protein (PAP), has anti-tumor effects in mice and laboratory studies. It has also been shown to help control some viruses such as herpes and human immunodeficiency virus (HIV).

According to pokesaladfestival.com, new research has revealed that a possible cure for Childhood Leukemia called (B43-PAP) is found in the common Pokeweed.

All parts of the plant are at least mildly poisonous when eaten, although the root is most toxic. Even so, the berries and dried roots are used in a few herbal remedies and the leaves can be eaten when small. Young, boiled pokeweed leaves & shoots are considered a special treat in the South and a canned version is occasionally available in grocery stores. The pokeweed leaves must be harvested before there is any noticeable red color in the leaves or stem, usually when the plant is still under about six inches tall. Even at this young age there are highly toxic alkaloids present so the leaves must be boiled in three changes of water to render them safe enough to eat. Boil for five minutes in each change of water.


The seeds are very toxic even after cooking, but the juice of the berries can be made safe by boiling. After boiling the berry juice can be made into a jam or jelly. The berry juice has also be used as a dye or as an ink. 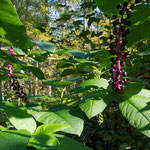 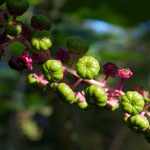 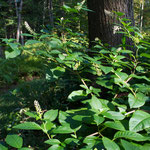 Pokeweed is yet another plant or fungi growing at Distant Hill that are known to have medicinal qualities. Others I have posted photos and info about include:

Read Our Reviews on

Distant Hill is rated one of the Top 10 Places to Visit in New Hampshire!